Samsung Galaxy Z Flip review: If this foldable phone isn’t cool, then I don’t know what is

You don’t really know ‘cool’ if you haven’t used a flip phone. You can see a person’s attitude change dramatically, the moment they have a flip phone in their hands. Even when you use the most premium phone from today, it may turn a few heads, but the attention you get when you slap a phone shut is something really different.

Flip phones became the shyte back in the early 2000s. However, by the end of the decade, while the tech started to evolve – with way better processors, crisper displays, DSLR-like cameras capabilities, much larger batteries, sleeker design, and RAM as high as 12 GB – phones all started to look the same – like slabs.

Fortunately, though, almost two decades later, flip phones are back, and I, for one, could not be happier. Samsung has launched the Galaxy Z Flip and Motorola has brought back the classic Moto Razr. Currently, it may feel like flip phones have a long way to go, and they probably do, but the phones also offer a beautiful amalgamation of future tech (I mean the display folds!!!) and nostalgia, and that’s one of the biggest reasons I would invest in the phone, and recommend it to anyone.

But that still leaves a question behind: Can you use it as your primary device?

Well, I used the Galaxy Z Flip for about four days as my primary device and I didn’t feel like I was missing out on anything when using the phone, but I did notice a few things that could be improved to make the experience a little better.

Here is a list of things I loved in the phone, and the things I did not like!

The Galaxy Z Flip has the Coolest design

I absolutely love how compact the Galaxy Z Flip is.

Fun fact: The phone’s design is actually inspired by Lancome’s compact for make-up. The Galaxy Z Flip is so pocketable, I love it. After such a long time, I have a phone that I can not only hold in my palm comfortably, but one that I can actually slip it into any clothing I wear, and it doesn’t peak out of my pockets.

Another thing I found interesting about the device is that despite having a glossy body, it didn’t scratch easily.

I also found the Galaxy Z Flip has a sturdy body. And between us, I accidentally dropped the device (a few times) while reviewing it. The initial few times my heart crawled into my mouth when the phone dropped because I would be so sure I broke it. But the phone survived. So yay for making the phone sturdy, eh?

But this is where you ask: Nandini, if the phone is so compact and it fits so well in your palm, how did you manage to drop it so many times?

I say, fair question. The thing is, the glossy surface I mentioned, is a little too glossy, and if you keep it a little towards the edge of a couch, say, or a table with a slippery top, the phone tends to slip off on its own. I swear that’s how it dropped each time (I’m not that butter-fingered). One second it would be on the couch, and the other second I’d be hearing it clattering on the floor. Moving on, I liked the free-stop hinge, as Samsung calls it, which allows you to set the phone to any angle within its range of motion. The hinge lets you semi-fold the device, which makes it comfortable to view when lying down in bed. The nature of the free-stop hinge also means you can adjust the angle of the flexible display wherever you wish, and the device will hold its orientation. That’s extremely useful if you want to capture a selfie or video chat while going hands-free.

Its display is a delight

The Galaxy Z Flip’s display opens into a large, 6.7-inch OLED with a resolution of 1080×2636 pixels at a pixel density of 425 pixels per inch (ppi). It has a 21.9:9 aspect ratio, which gives it a nice, long-ish design making it great for watching videos.

Samsung uses the so-called “Ultra-Thin Glass” on the Z Flip, which is 30 microns thick, on the order of a very thin human hair. To add an additional layer of protection, Samsung covered the glass with a second plastic layer, which is fairly soft.

The plastic display has no (side)effects on usability. I, in fact, really enjoyed the colours and brightness levels of the display. Even in bright sunlight, the legibility of the screen was well maintained.

When I was reviewing the phone, many people who saw the device were first amused, of course, but immediately after most people asked: Does the screen not break where it folds? Let me tell you, there IS a semi-prominent crease cutting horizontally right down the middle, but you can’t notice it most times. There are no unsightly rainbow swirls around the crease either.

Usually, when I was using the device unfolded, playing games, or typing a message, I stopped noticing the crease.

The Galaxy Z Flip’s performance is as snappy as you’d expect from a smartphone powered by Qualcomm Snapdragon 855 Plus and 8 GB RAM. I played a lot of games, used multiple social media apps, watched a lot of Netflix on the phone, thanks to all the time social distancing gave me. And not once was I disappointed with the phone’s performance. I came across no lag. The phone was quick, responding to each touch and every swipe.

The Galaxy Z Flip runs Samsung’s One UI 2.0. The UI is extremely intuitive, and very well oriented with the foldable display. The UI also comes with a feature called Flex mode, but I want to address that as a separate feature I like about the device.

If I am being honest, the Galaxy Z Flip’s camera is surely not as good as Galaxy S20 Plus or S20 Ultra’s, however, in the four days I used the camera for both selfies, videos and rear camera pictures, it didn’t really disappoint me. Although some indoor pictures seemed a little over-saturated, however. If you are mostly clicking pictures for your social media, then these pictures will definitely look great on your feed.

Low-light pictures were quite decent too, but low light slow-motion images are close to horrible. Videos shot on the rear camera are great. They retain good details and are quite stable as well.

If you are a photography enthusiast, you may find a few shortcomings in the Galaxy Z Flip’s camera, however, for day-to-day photography, it won’t disappoint you. Your social media feed will still bedazzle!

You can click on the Flickr link below to see some sample shots taken from the Galaxy Z Flip.

The side-mounted fingerprint sensor was a good call!

I have also been reviewing the Galaxy S20 Plus, which comes with an in-display fingerprint sensor, and good lord is it annoying. I was so glad that Samsung chose to drop Qualcomm’s in-display fingerprint sensor and opted, instead, for a side-mounted sensor. It’s much faster because it’s capacitive, but I didn’t really like the placement. It’s on the side, which would normally be very handy, but Samsung, for some reason, placed it on the top half of the phone. You need to slide the phone down every time you want to reach it, especially if you have small hands like I do, and reposition the phone in an unnatural manner. On a normal phone, the placement would have been OK. On a flip, it’s not. 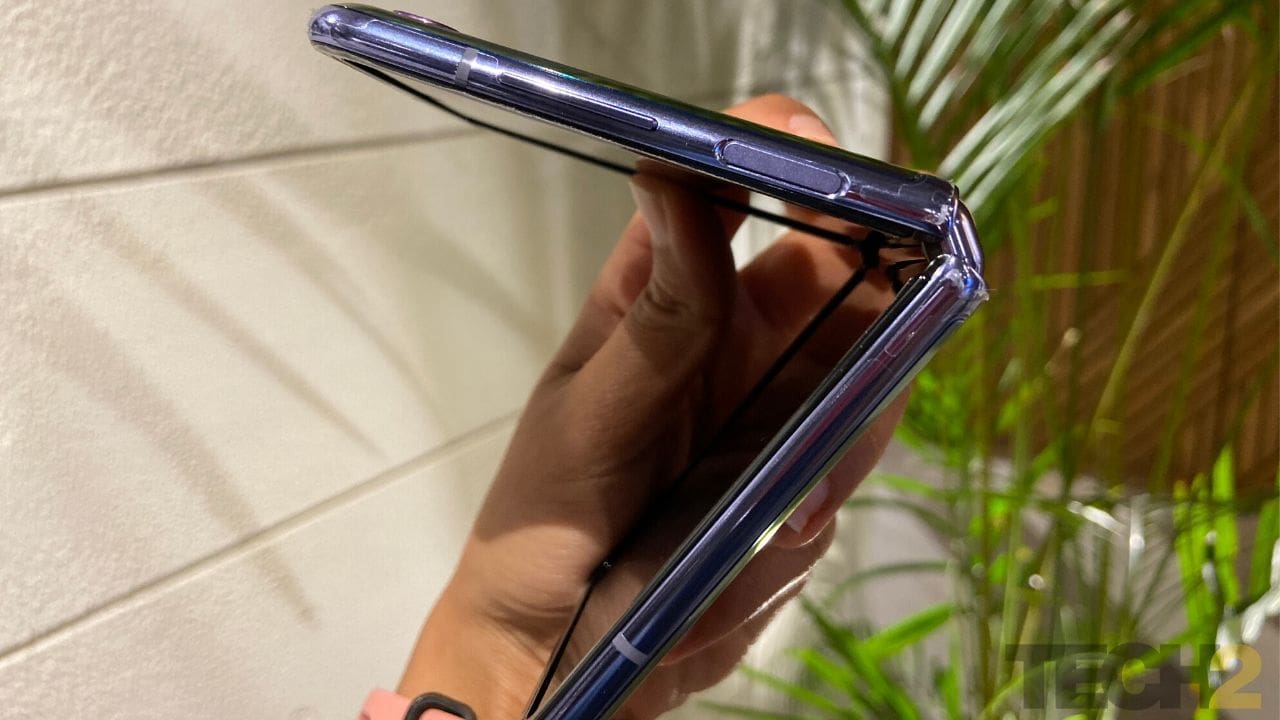 Finally, I want to address Flex Mode. This mode fires up in the camera app the moment you start bending the phone. When half “flexed,” the camera app gets divided into the view-finder on the top half of the phone and the settings and camera button on the bottom half. Flex mode is great for video calls or when you want to go hands-free, or take a picture on a timer – you don’t need to look for random things to use as a stand for your phone. What I don’t understand is why Samsung chose to keep this mode limited to the camera app. Couldn’t some other apps be updated to take better advantage of it? Third-party video calling apps, Youtube?

Speaker is loud but poorly placed

The Galaxy Z Flip features a stereo speaker at the bottom, which though loud, and has really crisp audio, is placed very poorly. The speaker is positioned in such a manner that even if you hold the phone horizontally or vertically, chances are high that you’ll block the audio output. This is a problem when you are watching a video, playing games or even when taking a call on loudspeaker. An extension to my previous point is the one-hand usability of this device. While the longish design has other benefits, it also brings the issue of using the device with one hand — especially if you don’t have really large hands.

Though I was easily able to type with one hand, when I wanted to check my notifications, and pull down the shortcut bar from the top, I HAD to use the other hand so I didn’t drop the phone. Additionally, flipping open the phone with one hand is a task, so is flipping it shut. You will be able to do it, but I wouldn’t advise you to do this in public, because that fumbling does not look cool.

Battery is OK, but it could be better

The Galaxy Z Flip has a 3,300 mAh battery, which is a sizeable battery, but in regular use, it lasts only about 10 hours to a maximum of 12 hours. And if you binge-watch, then battery life goes further down. The external display could do more

The Samsung foldable phone features a 1.1-inch AMOLED display on the outside, which you see when the device is folded. The tiny display shows notifications, time, battery percentage, caller details, and such. However, the display is so small, most previews on it don’t entirely fit, so you mostly don’t get enough information from that tiny display, and if there are multiple notifications, and you double tap on the display to see more, then it prompts you to open the phone and cheggit yo’self! When the device is folded, the small display also works as a viewfinder, but in practice, it was amusing only the first two times, because you can barely see anyone or anything, and that irked me so much that I ended up just unfolding the device.

To buy or not buy, is really the only question now

Well, undoubtedly, there are a lot of premium smartphones out there, even ones by Samsung itself, that would probably offer you a more wholesome or powerful experience than the Galaxy Z Flip. But if that’s really what you are looking for, Z Flip is probably not meant for you. This foldable device is for people who love a little attention, the ones who really miss flip phones, and the ones want to be a part of the future tech league.

You may get better performing phones out there, but will they make you look as cool?